This time we are organised and we know how to cross over to Dog Island. Everything is… was… in place but a small grain of sand came to jam the mechanism that we thought was well oiled. The car that we were meant to take is immobilised and for a lunch, it’s a bit expensive to add D2500 (€55/£51/$83) for the taxi. The African boat has been booked so we decide to go round Barra anyway.
At the hotel, Sarjo (lifeguard) has brothers in the trade and I had organised a private crossing. Expect to spend D2000 for a return journey. 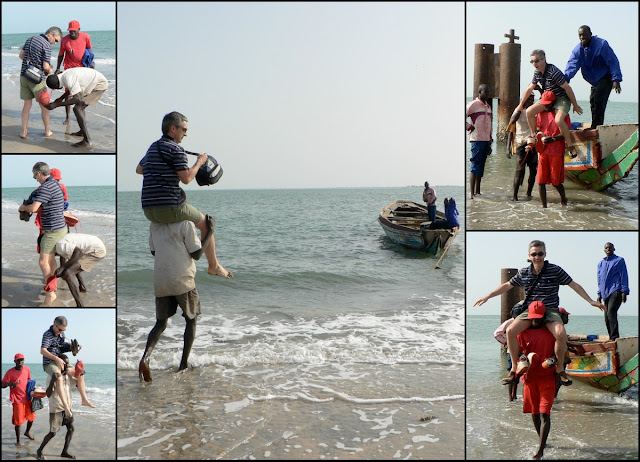 The boat was waiting for us near the hotel’s beach and due to the level of the water, a guy “took care of us.” Pascal’s reaction (top-left) is too funny because he wasn’t aware of this: “What does this guy want with me?” he seems to say. The advantage is that you do not waste time going to the port and the crossing only lasts 20 to 25 minutes compared to the 40 minutes to 3 hours that it would take for the “ferry” on various days. 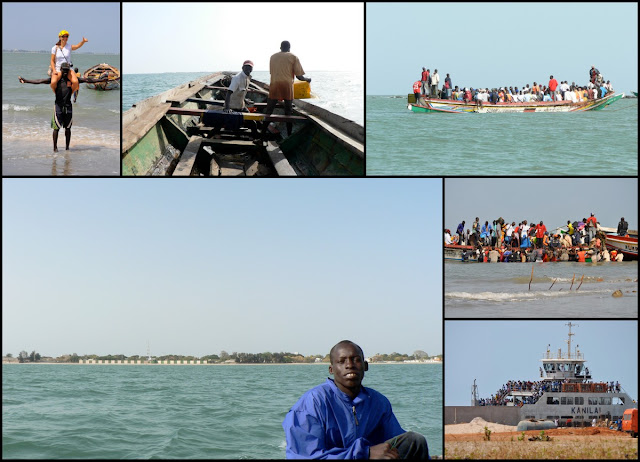 The crossings are so common that the rates are of D10 (€0.25/£0.20/$0.33) for the ferry (bottom-right), D20 for the pirogue plus D5 for not getting your feet wet. However you must not mind being shoulder to shoulder with the crowd or being in an incredibly packed boat, not to mention subject to the quasi-non-existent security regulations.
The guys still had to bail the water as there are always some small leaks. From afar (bottom-left), we enjoyed the coast, with the hotel on the right of the guy, and the president’s residency with its green and white striped building on the left. On the far left, we can see the port of Banjul. 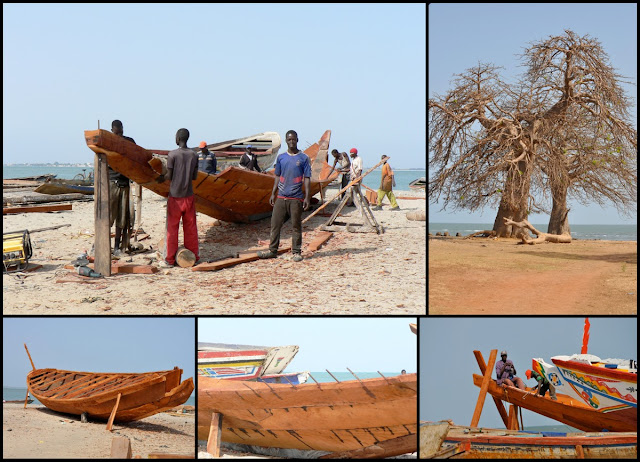 As is the case everywhere, there is sand, and not too much vegetation. The baobab however, thrives in this environment.
In Gambia, there is a big culture of African boat and pirogue building. There was once the arrivals of fishermen but seeing as they would then have to cross over again to Banjul, the arrival zones for fishermen are nowadays more towards the port of Banjul or Tanji. 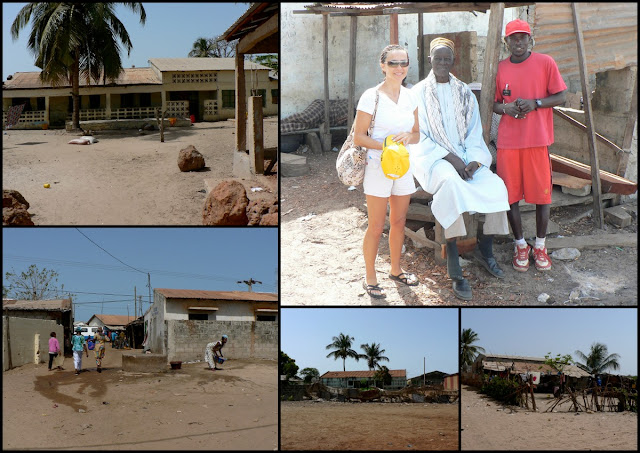 Sarjo’s father is the ‘mayor’ of the area, the “Alkalo” (top-right). We went to say hello. He did not want to move to avoid the crowding because here, the moment a “toubab” talks with someone, stops on a market stall, he or she is relatively quickly encircled. He had his boat company to cross the estuary and many of his children are in the trade. He has four wives and a good number of children. Eight brothers and sisters for Sarjo, then 15, 7 and 8 with the other wives. That’s a lot of mouths to feed! Nowadays, the younger generation often only has one wife and two to four children.
As mayor, he collects taxes and allocates “compounds” (parcels of built and unbuilt land) for a tax of D150 per year. If someone does not maintain their parcel and leaves it abandoned, the mayor has the power to take it back and to allocate it to someone else. He also acts as a conflict mediator. He remains present until each party is satisfied. If there is a problem, there can be a vote to elect a new Alkalo.
Close to the communal wells (bottom-left), we met Sarjo’s mother and we also passed in front of his house (top-left). Each wife has her house in which she lives with her children… and eventually grandchildren and daughter-in-laws. Everywhere, the “earth” is nothing but sand; it’s crazy! 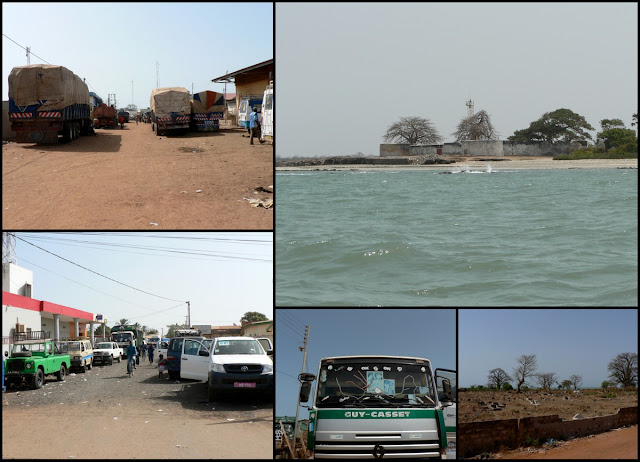 In Barra, we noticed long lines of trucks and cars. We found out that they were queuing up to take the ferry. It’s a necessary passage to go from the North of Senegal to the South or to other southern countries such as Guinea-Bissau. Trucks can stay there, waiting, for over a week.
That information made us less inclined to cross with our car if we would have to wait for two days to take the ferry back! We got a nice surprise when we saw a truck whose number plate was Senegalese, but whose insignia was of Guy Casset from Echelles (38 Isère, France). "Hey guys, if you’re looking for your truck, it’s ok, we found it!” It’s now living an African adventure ☺
After abandoning James Island and founding Bathurst (Banjul), the English, who had obtained the River Gambia through the Treaty of Versailles in 1783, wanted to create a defensive zone on the other bank seeing as the canons did not shoot far enough to cover the eight miles that spanned the river. Fort Bullen was erected at Barra (top-right) around 1827. This allowed them to control all of the traffic that came and went through the River Gambia, particularly the slave trade that was still in full swing despite the abolition.
The last photo (bottom-right) is of a Muslim cemetery.
Posted by Maurice Pascal et moi at 8:36 AM

Email ThisBlogThis!Share to TwitterShare to FacebookShare to Pinterest
Labels: Barra 01/04/2012